After 5 years in the making, Ann Arbor native Harlin Newcomb, 35, will be celebrating the release of his freshman studio album, “Ground Zero,” Jan. 25 at The Blind Pig, located at 208 S. First St. in downtown Ann Arbor. Doors open at 9:30 p.m. and cover is $7 for 21 and up and $10 for 18-20. Newcomb and local rappers Nickie P., Bedroxx and Tru Klassick will be performing, along with DJ Chill Will from Tampa, Fla.

After grabbing a cup of coffee at The Ugly Mug Café on West Cross Street on a chilly September night, Newcomb made his way to a private recording studio in the historic district area of downtown Ypsilanti. Anxious body language suggested nervous energy, which he acknowledged happens when he’s going into the studio to record music.

Newcomb called his producer Steffen Gelletly to say he had arrived and to gain access to Vox Box recording studio, which Gelletly owns and runs. The studio lacks a street address, which Gelletly said he prefers.

“The studio is not open to the public,” Gelletly said. “I don’t want to work with amateurs, only people of high quality.” END_OF_DOCUMENT_TOKEN_TO_BE_REPLACED

Violin Monster is a professional, full-time street performer, with a beer named after him. (Photo courtesy Christine Marie Hoffman / Sept. 29, 2013)

Corner Brewery, located at 720 Norris St. in Ypsilanti, will be hosting the Violin Monster’s 493rd Birthday Bash on Thursday from 6 p.m. to midnight.

The Violin Monster, who clarified things a bit, said he’s a werewolf and was born Oct. 3, 1520 in Ireland, but now calls Ann Arbor home.

“I feel like Ypsilanti and Ann Arbor are so connected, and I feel like I’ve been embraced by the community,” he said.

When asked whether or not he has an alter ego, he said, “I am known simply as Violin Monster.”

The Monster said he has been a professional, full-time street performer for two and a half years.

“It’s more of a lifestyle than a job, because it’s a lot of fun, and I love being able to do something this creative,” he said. “But I work very hard at it.” END_OF_DOCUMENT_TOKEN_TO_BE_REPLACED

LGBT Resource Center Program Coordinator, Mary Larkin, said the BBQueer is the center’s kickoff event for the academic year and showcases some of the programs offered on campus.

“When the weather is as nice as it is today, I just think it’s worth something to look out and see that folks can just gather like this within the LGBT community and allies and just have some fun,” Larkin said. END_OF_DOCUMENT_TOKEN_TO_BE_REPLACED

In a roundabout way, Eastern Michigan University Student Government reversed its decision to not fund the Genocide Awareness Project, a traveling exhibit that compares abortion to genocide through graphic photos of genocide victims placed side-by-side with images of abused children and aborted babies.

Students for Life, a pro-life student organization at EMU, received permission from the university in November 2012 to have the GAP exhibit on campus April 11-12 outside of King Hall and the Marshall and Pray-Harrold buildings. END_OF_DOCUMENT_TOKEN_TO_BE_REPLACED 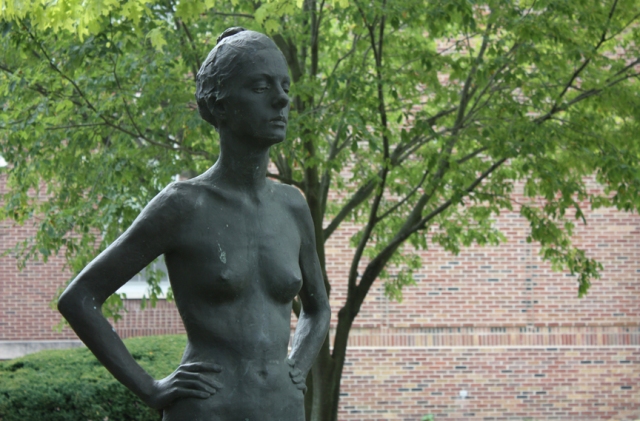 The 5-foot-3-inch, 150-pound statue, a nude representation of the goddess of the hunt, was stolen from Eastern Michigan University’s campus on two separate occasions. (Bryan K. Alfaro / The Eastern Echo / Aug. 2, 2012)

March 18 marked the 28th anniversary of the first theft of Eastern Michigan University’s life-size bronze statue of the Roman goddess Diana, located on a pedestal in the courtyard outside of Ford Hall.

The 5-foot-3-inch, 150-pound statue, a nude representation of the goddess of the hunt, was sculpted by EMU fine arts graduate Darryl Miller and donated to the university in 1982.

Former EMU art professor John Pappas told The Eastern Echo in 1985 that Miller’s statue was an assignment from his graduate program, and he donated the piece to the university as part of the Art on Campus Committee’s plan to develop more sculptures on campus by students.

On March 18, 1985, John Van Haren, the head of EMU’s Art Department at the time, reported the theft of the statue, which was “securely” mounted with hidden bolts.

“We believe the statue was taken not by a prankster, but by someone skilled who saw the value of the piece and will try and sell it,” Van Haren told The Echo after the theft.

However, days after the statue went missing, The Eastern Echo received a three-page ransom note from the abductor(s), “Requesting that [then] EMU men’s basketball head coach Jim Boyce be removed from the team—or the statue would become ‘200 bronze ashtrays,’” an Echo article said. END_OF_DOCUMENT_TOKEN_TO_BE_REPLACED 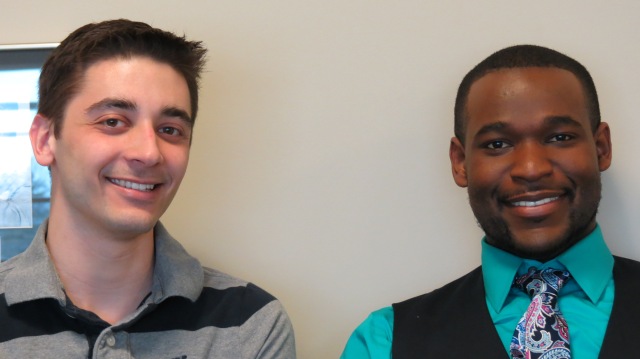 “After meeting with President Norfleet, we came to an agreement upon which I would withdraw the resolution upon certain actions that he would take,” Cartier said.

When asked to clarify what those actions were, Cartier declined to comment other than saying Norfleet had agreed to a few “concessions.”

Norfleet said he had no idea the impeachment resolution was coming.

“No idea. It was really bizarre,” he said. END_OF_DOCUMENT_TOKEN_TO_BE_REPLACED

Ypsilanti police Lt. Deric Gress said there is not a specific person who has been identified as a suspect at this time.

“The detectives are processing and following up on evidence and information constantly on a daily basis, and to release information prematurely could hinder the case,” Gress said. END_OF_DOCUMENT_TOKEN_TO_BE_REPLACED